Onno W. Purbo, a copy left, open source believer, educator and ICT evangelist, holds a Ph.D in Electrical Engineering from University of Waterloo, Canada. He is an ISOC member (#299522 2/28/2012) and an active ham radio with callsign YC0MLC. He has published 50+ books, including FREE ICT ebooks for high schools in 2008. Some of his latest books (in Indonesian) include: “Internet TCP/IP: Concept and Implementation” (2018), “Text Mining: Media Social Analysis” (2019), “Operating System: Concept and build your own OpenWRT & Android ROM” (2019).

Onno led the first Internet connection at Institute of Technology in Bandung, from 1993 to 2000, and used it to build the first Indonesian educational network. He led the effort to deregulate WiFi frequencies and introduced cyber cafes, neighborhood networks, and community cellular networks to Indonesia. In 2000, He organized the first community telephony network over Internet, VoIP Merdeka, later known as SIP based VoIP rakyat that uses +62520 and +62521 area codes. He is behind the re-introduction of ICT into the Indonesian high school curriculum.

He is currently involved in the operation of:

A Glimpse on International Activities Documentation 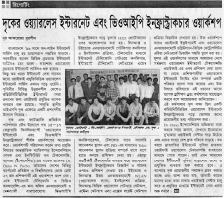 Funded by IDRC, Onno (in the middle) ran a workshop on VoIP networks in Dakka Bangladesh around 2003-2005. It was also on the local news as shown in the picture. The workshoped was supported friends in Bangladesh running their own VoIP softswitch and building community VoIP network. 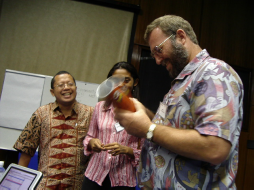 Picture during running wireless workshop in Pretoria South Africa around 2003-2005. See the “cantenna”. The workshop is supported by IDRC Canada.

Picture taken after running a workshop on VoIP & Wireless Internet in Paro, Bhutan around 2003-2005. The workshop was a collaboration between IDRC and Ministry of Information and Communications Bhutan. 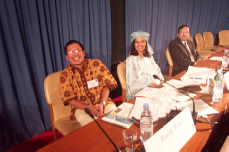 Picture taken right before a session in the First World Summit on Information Society (WSIS) in Geneva December 2003.

Onno was also sharing in the second WSIS in Tunisia sharing Indonesian experience in narrowing the digital divide. 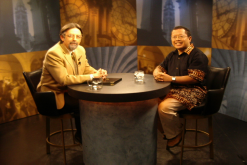 Onno was interviewed by CPAC Channel in Ottawa, Canada and sharing experience in narrowing rural digital divides. It aired on 25 March 2004 at 21:10 PM Ottawa Time. The video is available on Youtube. 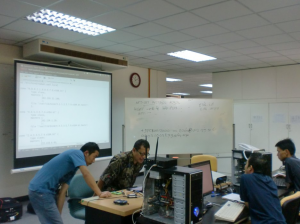 Picture on the left was taken at Prof. Kanchana’s InterLAB at AIT during VoIP Workshop for Ministry of Infocomm Bhutan.

As shown in the picture, we were trying to run an OpenBTS 2G cellular network using USRP 1 on top of the PC connected to asterisk running in the network. 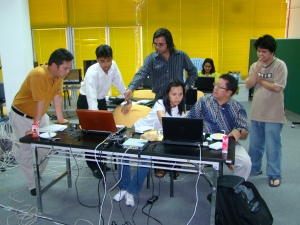 Picture on the right was taken IDRC PAN ALL Meeting in Penang, Malaysia in June 2009. At the meeting, Onno was explaining how to build low cost & long distance network using WOKbolic and PVC Tubing. The actual wok was borrowed from the hotel kitchen :) …

Summary of Awards / Acknowledgemet (in Indonesian)

A Glimpe of the Struggle & Its Impact 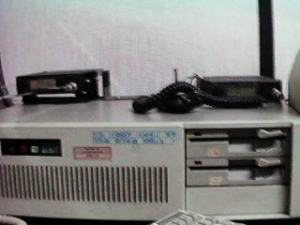 In 1993, with help of his students at Institute of Technology in Bandung (ITB), he led the building of a community based education network using 1200bps AX.25 packet radio technology running on 2m band walkie talkie.

Later in 1996, with help from Suguru Yamaguchi and Jun Murai, the network received 1.5Mbps Internet link via JCSat Satellite to Japan, which is the best Internet connection (and speed) available in Indonesia at that time. They put their trust in Onno to build the first education network in Indonesia. Onno, with ITB, managed to connect a dozen educational institutions, later becoming the role model for the Indonesian government for educational and universal Internet access. 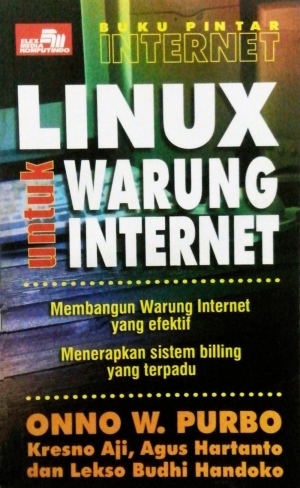 Around the same time, with the help from many friends, he introduced the concept of cyber cafes for low-cost Internet access in Indonesia. The term WARNET (Warung Internet) was created, with Warung being equivalent to Cafe in English. To promote the idea, Onno published a book on how to build cyber cafes (Warung Internet / WARNET). Around the year 2000-2002, the peak of the cyber cafe boom was reached. There were close to 100,000 cyber cafes established throughout the county. An association of Indonesian cyber cafes was also established. The cyber cafe was the main driver in introducing many Indonesians to the Internet. Cyber cafes empowered users without any support from the government or national operators. These users later became the main customers of the currently booming cellular / smartphone Internet markets. Today, there are only around 17.000 cyber cafes left in Indonesia. Many have to transformed into game centers to survive. 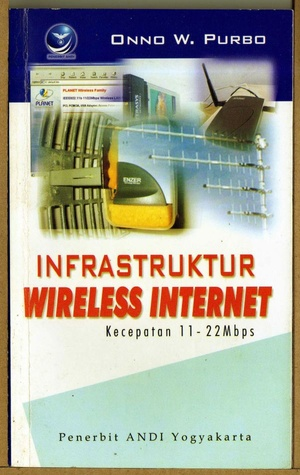 Knowing that speed is very important to the life of Indonesian Internet users, the ability to bypass the incumbent infrastructure would be key for its continued growth. In the beginning, around 1996, we experimented with community wireless systems with Karlbidge & Karlnet running at 1Mbps at 950MHz. Onno was nearly jailed as the experiment was performed with appropriate licenses.

Later around 2000-2005, he fought along with many wireless & WARNET communities to liberate 2.4GHz ISM band in Indonesia. He run many workshops, seminars, at a rate of 2-3 seminars / week. In the process, a book on wireless Internet infrastructure was published.

With help from IDRC Canada and CERN Europe, he was able to present the low cost long distance wireless solution for rural connectivity in WSIS 10 to 12 December 2003 (in Geneva) and WSIS 16 to 18 November 2005 (in Tunis). Exposure to WSIS allowed Onno to give workshops in many countries, such as, South Africa, Bangladesh, Nepal, Bhutan, Thailand, Cambodia etc.

The liberation of WiFi 2.4GHz had significant impact on Internet adoption and use in Indonesia. An exceptional example is the wajanbolic antenna. Wajan is wok in Indonesian. Thus, wajanbolic is basically wifi antenna built using a wok as the base (wokbolic in English). Onno did the calculations and published the spreadsheet to calculate wokbolic at http://125.160.17.21/speedyorari/view.php?file=orari-diklat/teknik/2.4ghz/buku-wifi/homebrew-antenna.xls and http://125.160.17.21/speedyorari/view.php?file=orari-diklat/teknik/2.4ghz/buku-wifi/wireless-network-calculation-2-2003.xls. He also ran many workshops on how to build tin-can antennas and wokbolic antennas. Today, we will be flooded by information from Indonesian sites if we search for “Wajanbolic” on Google.

Using wajanbolic & long range wifi, neighborhood networks for villages and rural areas began to spring up, known as RT/RW-net in Indonesian. RT/RW-net is basically wireless intranet for the local neighborhood. Today, it is estimated there are around 22,000 RT/RW-net organizations in the country. As estimated by Mikrotik Indonesia, there are around 3000 Indonesian villages connected to the Internet through these community efforts. Again, today, we will be flooded by information from Indonesian sites if we google “RT/RW-net”.

In early 2003, the Indonesian government planned to raise the cost of telephone service. Responding to this, and with the help from the Indonesian ISP Association (APJII), we led the first Indonesian public VoIP network called VoIP Merdeka. In 2005, in collaboration with Anton Raharja et.al., the community Internet telephony technology was switched to SIP. The network is later known as VoIP Rakyat (People’s VoIP in English) and continues to operate at http://webpanel.voiprakyat.or.id/. The VoIP Rakyat server is located at one of the Indonesian Internet Exchanges and currently operates using their own ENUM area code +62520 and +62521. VoIP Rakyat has recorded millions of minutes of free VoIP calls among Indonesians.

Around 2009-2010, Onno was exposed to OpenBTS, an open-source 2G stack, at Internet Lab. of Prof. Kanchana at AIT, Thailand. Several articles on OpenBTS were then published in the Indonesian Internet from these 2-3 days exposure at Prof. Kanchana’s Lab. Later, Range Networks provided OpenBTS education kits, enabling Onno to understand the technology in more depth and run many workshops and seminars on OpenBTS in Indonesia. In around 2012-2013, with the help from Kurtis Heimerl et.al. from TIER group in UC Berkeley, several hundred villagers in Papua were able to enjoy low cost mobile access using OpenBTS. Kurtis’s OpenBTS in Wamena Papua ran for five years before being replaced with a similar open-source LTE solution (CoLTE).

Workshops on OpenBTS technology were organized mostly by ICTWATCH and OnnoCenter. The first OpenBTS workshop in Indonesia was on 30 April 2011 in University Gajah Putih, Takengon, Aceh with about 40 students participating. Since then more then 80 OpenBTS workshops and demo sessions have been organized with a total of more than 14,300 participants. Futhermore, it has been featured in media, including Detik.com, KOMPAS, MetroTV and NET TV. Heavy Indonesian discussion can be identified via Twitter using OpenBTS as search keyword. As a result, many universities invest some of the resources to do research on OpenBTS technology. An estimate OpenBTS units in campuses are as follows, Surya University 10 unit funded by Ford Foundation, Telkom University more than 5 units, Polytechnics Electronics in Surabaya more than 12 units, Institute Technology in Bandung more than 3 units, Politechnics Aceh 2 units, University of Indonesia 2 units, ICTWATCH 3 units, Airputih Foundation 1 unit. These are mainly used for research purposes and building the human resource capacity capable in deploying OpenBTS in rural Indonesia.

On 6 January 2016, Rudiantara, Ministery of Communication and Information, join an informal community discussion at ICTWATCH headquarter on the possible community use of OpenBTS for rural. He agreed to support OpenBTS for rural deployment. After much discussion, on 8 April 2016, Rudiantara signed Ministrial Decree Number 5 / 2016 on technology trial on telecommunications, informatics and broadcasting. Since then, Onno has been supporting David Haag & Kurtis Heimerl work in Papua. Again, today, we will be flooded by information from Indonesian sites if we google “OpenBTS onno” as well as on Youtube.

In 2013, the Indonesian ministry of education removed ICT from the Indonesian student curriculum. Today, many of the computer labs at schools have started to fail. Onno and several dedicated teachers began educating Indonesian teachers on the use of ICT for education. To support this, Onno operates a free moodle-based e-learning server at http://lms.onnocenter.or.id/moodle. He has conducted teacher support workshops in 40+ cities involving 8000+ teachers. The workshops were self-financed and carried out by the community without government’s assistance. Total students in the 4 core e-learning server is currently around 38.000++ students.

Onno continues to spread Internet and ICT knowledge by publishing books, articles, wiki pages as well as conducting many seminars and workshops in many schools and campuses. Onno can easily reached by interested Indonesians via twitter @onnowpurbo with total follower more than 350.000. Onno’s twitter is a key platform for chatting about many ICT topics among Indonesian geeks and ICT activists. Onno’s dream is fairly simple. He focuses on helping Indonesians move forward by relying on their brain power and not their muscular strength.