From OnnoWiki
Jump to: navigation, search

How Remote Places Can Get Cellular Coverage by Doing It Themselves

With Swedish telephone numbers and a tree-bound base station, a remote Indonesian village runs its own telecommunications company. 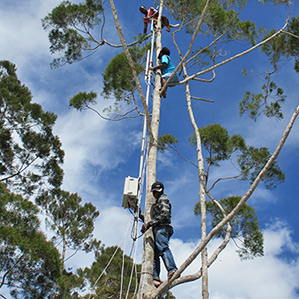 Canopy network: In the highlands of Papua, Indonesia, men use ropes to haul a base station high into the boughs of a cemara tree.

A four-hour drive from the nearest cellular coverage in the remote highlands of Papua, Indonesia, a new kind of guerilla telecom network is operating, albeit outside the law, using a cheap base station roped into a treetop.

The project was set up by a team from the University of California, Berkeley. The resulting network is now operated by a tiny stand-alone telecommunications company run by a local NGO, with a laptop for local billing and a satellite connection to the rest of the world. The network relies on Swedish phone numbers because no local telecommunications company would provide them.

“It’s a telco-in-a-box that we put in a tree,” says Kurtis Heimerl, a developer at Range Networks and grad student at UC Berkeley who led the project. “It’s a demonstration that these populations can profitably and sustainably manage their own networks. We don’t need telcos to do this; these communities can do this by themselves.”

The village where the network is situated sits in the tropical highlands of Papua—a region where indigenous people avoided contact with westerners until scientists stumbled upon them in 1938.

The project was built partly with existing infrastructure: a small hydro-power generator and a satellite dish that provided Internet connectivity to a local school. To this the Berkeley group added a base station for local cellular connectivity, a battery for nighttime usage, a Wi-Fi router for a local Internet hot spot, and a billing system.

The project started operating this year with an initial $10,000 investment. It has 187 cellular subscribers and an average of $830 per month in revenue (including $368 in profits). That company provides several jobs, including three for people who sell airtime credits.

Though the researchers say they got tacit approval from high-level figures in the Indonesian government to run the project, it has no formal license. Gaining legal access to available spectrum—without needing a lot of money upfront for a license—will be crucial to expanding the concept, Heimerl adds.

Ed Cutrell, who manages a research group on technology for emerging markets at Microsoft’s India research lab, says Heimerl’s work is a key demonstration of how to bring connectivity to the most remote areas in the world. “His research is opening up the possibility to connect millions of people who are just too remote and scattered to be of interest to telecoms,” Cutrell says.

The system includes some elements of “redneck engineering,” Cutrell says. “They just hauled a base station up into the tree and roped it in, and they’ve got a signal.”

But it also features some technical novelties. One is a power-saving strategy that lets users govern how much the system is used at night. Normally, a telecommunications company operating a base station in a remote area would save energy costs (often from diesel fuel) by shutting down the system overnight.

The UC Berkeley group’s system is kept in a low-power “sleep mode” at night, and users can switch it on. All they have to do to make a call or send a message in the middle of the night is visit one of three wireless gadgets mounted in central locations, and hit a red button to “wake up” the base station. Incoming calls or text messages also “wake up” the system, but the call or message is delayed 20 seconds while the power amplifier kicks on, allowing a signal to become available. This provides 24-hour availability while saving about half the power compared to leaving the system on all night, Heimerl says.

Around the world, hundreds of millions of people, mostly in remote rural areas, lack even basic cellular coverage. And major wireless carriers—such as Indonesia’s Telkomsel—are often unable to make a business case for serving such areas. In some cases, super-efficient base stations can help with the economics, particularly in reducing power consumption (see “A Tiny Cell-Phone Transmitter Takes Root in Rural Africa”). But where companies can’t see a business case, “the only solution we found was to let the communities do the coverage themselves,” Heimerl says. He is already planning projects in other areas, including the Philippines and Pakistan.