Support vector machine (SVM) is a machine learning technique that separates the attribute space with a hyperplane, thus maximizing the margin between the instances of different classes or class values. The technique often yields supreme predictive performance results. Orange embeds a popular implementation of SVM from the LIBSVM package. This widget is its graphical user interface.

For regression tasks, SVM performs linear regression in a high dimension feature space using an ε-insensitive loss. Its estimation accuracy depends on a good setting of C, ε and kernel parameters. The widget outputs class predictions based on a SVM Regression.

The widget works for both classification and regression tasks. 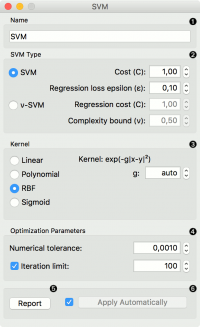 In the first (regression) example, we have used housing dataset and split the data into two data subsets (Data Sample and Remaining Data) with Data Sampler. The sample was sent to SVM which produced a Model, which was then used in Predictions to predict the values in Remaining Data. A similar schema can be used if the data is already in two separate files; in this case, two File widgets would be used instead of the File - Data Sampler combination.

The second example shows how to use SVM in combination with Scatter Plot. The following workflow trains a SVM model on iris data and outputs support vectors, which are those data instances that were used as support vectors in the learning phase. We can observe which are these data instances in a scatter plot visualization. Note that for the workflow to work correctly, you must set the links between widgets as demonstrated in the screenshot below.

Introduction to SVM on StatSoft.