A tree algorithm with forward pruning.

Tree is a simple algorithm that splits the data into nodes by class purity. It is a precursor to Random Forest. Tree in Orange is designed in-house and can handle both discrete and continuous datasets.

It can also be used for both classification and regression tasks. 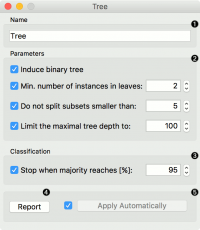 There are two typical uses for this widget. First, you may want to induce a model and check what it looks like in Tree Viewer.

The second schema trains a model and evaluates its performance against Logistic Regression.

We used the iris dataset in both examples. However, Tree works for regression tasks as well. Use housing dataset and pass it to Tree. The selected tree node from Tree Viewer is presented in the Scatter Plot and we can see that the selected examples exhibit the same features.