Predict according to the nearest training instances.

The kNN widget uses the kNN algorithm that searches for k closest training examples in feature space and uses their average as prediction. 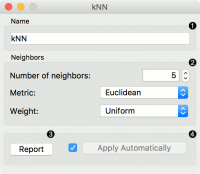 The first example is a classification task on iris dataset. We compare the results of k-Nearest neighbors with the default model Constant, which always predicts the majority class.

The second example is a regression task. This workflow shows how to use the Learner output. For the purpose of this example, we used the housing dataset. We input the kNN prediction model into Predictions and observe the predicted values. 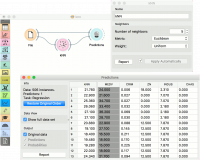